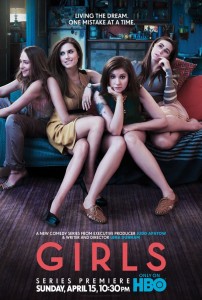 HBO’s new comedy, Girls,  has everything I look for in a television show.  It is smartly written, raucously witty and excruciatingly relatable.  It is a startlingly refreshing comedy in both its dry humor and acerbic social commentary. Yet, because its premise involves four single gals living in New York City, it has quickly drawn comparisons to HBO’s other female-centric comedy, Sex and the City.  While Girls  is clearly its own animal, the similarities are there. Take away the money, the clothes and the careers and it could be a prequel of sorts, had the SATC girls been twentysomethings in 2012.  Girls  is a self-deprecating un-photoshopped Sex and the City,  where pink cosmopolitans with perfectly curled lemon peel garnish are replaced with Solo cups of warm craft beer.

26-year-old Lena Dunham writes, directs and stars in the HBO comedy, produced by Judd Apatow of Bridesmaids  fame, which just finished its first season and is slated to return this winter.  Dunham graduated from Oberlin College with a degree in creative writing and first made waves with the independent film Tiny Furniture.

Discussing Girls  in a New York Times interview, Dunham said, “I get to look at so many aspects of what it means to be a woman, of what it means to live in an urban environment.”   While the shows are quite different and air over a decade apart, the same statement could have been made by the writers of Sex in the City  in 1998.

Girls  is very aware of the comparison and pokes fun at the association while simultaneously paying homage to their television predecessor.  Shoshanna (Zosia Mamet) has a SATC  poster prominently displayed on the wall of her apartment, and refers to her cousin Jessa (Jemima Kirke) as “definitely a Carrie, with some Samantha aspects, and Miranda hair.”  It is clear to anyone watching, who had also been a fan of SATC,  that naïve and virginal Shoshanna is a Charlotte, and Jessa, who misses an appointment at the women’s health clinic to have sex in a bar bathroom, is most obviously a Samantha.  This makes the responsible and sometimes uptight Marnie (Allison Williams) the Miranda of the group and aptly leaves the main character Hannah to clumsily fill Carrie’s Manolo Blahniks.

At the same time that they accentuate it, the apparent similarities are paradoxically what expose the core differences of the two shows. Hannah is Carrie…in real life.  Hannah is all of us in real life.  Those of us who watched Sex and the City  related to the women’s relationship struggles, but most us didn’t have the closets or six pack abs to match.  Hannah is us, only funnier.  While Sex and the City  projects itself as older, wiser, and wearing better shoes, Girls  is its awkward, uncoordinated and downright hilarious younger sister.

One of the major tropes of SATC  was the rift between women in their twenties and women in their thirties.  In a season 2 episode, Samantha exclaims, “These girls in their twenties, they’re so spoiled and ungrateful, they think they’re it,” to which Miranda replies, “because the world validates their delusion.”  Girls  does not validate this delusion.  In fact, it exposes it. No one would choose to be in Hannah’s unemployed, financially insecure and emotionally unfulfilled shoes.  Yet many of us are, or were at one time.

While both shows expose embarrassing and relatable relationship issues, Girls  does not sugarcoat, or airbrush.  Miranda’s postpartum sex scenes (before she had dropped the baby weight)  look like a Cinemax late night feature when compared to Hannah and Adam’s self-conscious and uncomfortable to watch romp in the first episode of Girls.  Samantha’s slight ‘weight gain’ in the SATC movie, represented by the svelte actress wearing a pair of pants one size too small, is treated as something that needs to be addressed immediately.  Meanwhile on Girls, Adam grips Hannah’s stomach awkwardly in bed, causing average weighted women everywhere to cringe.

At the heart of both shows is a female writer using her own experiences as social commentary.  Both women grapple with insecurities and complicated relationships, all the while navigating life in the city.  Adam, Hannah’s pseudo-boyfriend, may not be Mr. Big, but he is equally emotionally distant and cryptically confusing, in need of immense examination and ripe for the analytic writer’s eye.  In one particularly hilarious turn of events, Marnie’s boyfriend gets his hands on Hannah’s notebook, in which she comments on the questionable state of their relationship. This causes problems for the couple and, after Hannah is forced to read aloud to them from her writing, she asks, “If you had read the essay and it wasn’t about you, do you think you would have liked it? Just as, like, a piece of writing?”

Hannah asks of Marnie and her boyfriend what Girls  asks of the viewer.  Its reflexive nature is constantly turning the gaze back on itself.  While we relate to the scenarios experienced by the characters, we are constantly bombarded with purposefully uncomfortable images, such as the aforementioned sex scenes between Hannah and Adam.  By doing so, Girls  exposes the reality that Sex and the City  glossed over with high fashion and well-placed puns.

In the first episode, Hannah tells her skeptical parents, “I don’t want to freak you out, but I think I may be the voice of my generation.”  If the first season of Girls  is any indication, she just might be.

Girls returns to HBO in January 2013.  In the meantime, if you are a fan of the show, experience NYC by taking a walk in the ladies’ shoes.  The Guardian has created a map, with pins marking the real locations used in filming.  Create your own New York Girls tour and see the city through the eyes of Hannah, Jessa, Shoshanna and Marnie.