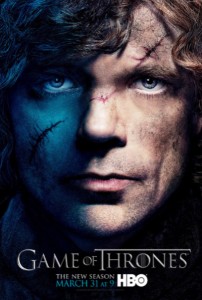 Winter is coming to New York City, and no, I don’t mean another snowstorm (thank goodness!). Stopping in five international cities, NYC will be the only city in the United States to host the Game of Thrones Exhibition — a display of costumes, weapons, and props from the Emmy-award winning HBO series. Imagine transporting to the beautiful country of Westeros and immersing yourself in the five houses of Stark, Lannister, Targaryen, Baratheon, and Greyjoy. If you live in the Northeast, or are game for a road trip, this could be a possibility for you. The traveling display, following the likes of the Harry Potter exhibition, will give fans an up close and personal experience with more than 70 original artifacts from Season 1 and 2. However, unlike the Harry Potter price tag of $26, this exhibition is free to the public. The Game of Thrones Exhibit will open in NYC on March 28th and stay until April 3rd. Other cities hosting the exhibition are Toronto, Sao Paolo, Amsterdam and Belfast.  Check out the HBO website for more information as it becomes available.

If you can’t make it, don’t fret! Season 3 of Game of Thrones  premieres March 31st on HBO.  In the meantime, continue watching the extended trailer (like me) to judge how it will compare with A Storm of Swords, the third novel in George R.R. Martin’s A Song of Ice and Fire series, upon which the show is based.

Who is everyone excited to see come back? How far will Dany go on her quest for revenge? And will Tyrion finally make things right with his family? I know one thing is for sure — season 3 will be full of jarring twists and heartaches for the characters and the audience. However, only one king (or queen) can survive. So whose side are you on?