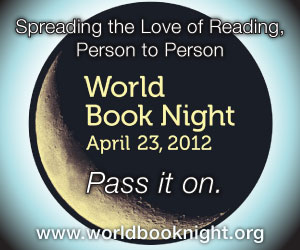 This Monday, April 23, marks the first annual World Book Night in the United States.  Started in the UK last year, World Book Night is an extension of World Book Day, which is in its fifteenth year and is celebrated in over one hundred countries.  World Book Day was originally started by UNESCO and according to their website was conceived as “a worldwide tribute to books and their authors…encouraging everyone, and in particular young people, to discover the pleasure of reading and to gain a renewed respect for the extraordinary contributions of those who have furthered the social and cultural progress of humanity.”  The date, April 23, was chosen in particular for its literary importance, as it marks the birth and/or death of many famous writers including Miguel de Cervantes and William Shakespeare.  The date also has historical significance, coinciding with St. George’s Day.  Fittingly, in Catalonia, Spain, the day is marked by the giving of roses and books to loved ones, with the incantation, “a rose for love and a book forever.”

Similarly to this beautiful tradition, the giving of books is the backbone of World Book Night, which is modeled after a World Book Day event in the UK, which sends “tokens” to schools –redeemable only on World Book Day for a free book at participating bookstores.  Started last year in the UK, World Book Night is a spin off of sorts, geared to adults, and while the moniker would suggest an after hours celebration, World Book Night is an all day event.  Instead of sending out tokens to schools, World Book Night relies on volunteers to act as “givers.”  The givers choose their favorites from the thirty titles selected to take part in the event; this year’s choices range from Maya Angelou’s classic I Know Why the Caged Bird Sings to pop culture phenom The Hunger Games and 28 other titles with a variety appropriate for both older teens and adults.  The givers will receive twenty copies of one title and on April 23 will go out into their communities to give away the books free of charge.  The event is made possible through the generosity of volunteers, who give their time, but also the authors, who do not receive royalties, and the publishers and printers, who produce the books free of charge.

As the premise of World Book Night is to promote reading in adults who are not typically avid bibliophiles by nature, givers are expected to go to places off the beaten path for readers.  Instead of schools and libraries, they will set their sights on shopping malls and train stations.  One New Providence, NJ giver spread the word through The Alternative Press that they will be outside of a local Dunkin Donuts handing out copies of The Book Thief by Markus Zusak.

Almost 80,000 givers have been secured world wide and will distribute 2.5 million books on Monday.  The United States makes up 25,000 of those generous volunteers, spread over 6,000 cities and towns.  While it is too late to get involved this year, visit the website and add your name to the mailing list so that during next year’s event you can personally help spread the literary love.  For now, remember, if you are out and about on April 23rd and see someone in front of your local coffee shop handing out books, smile, wave, and wish them a Good (World Book) Night!