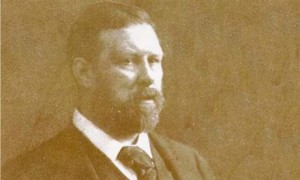 Birthdays are not an occasion given much significance in vampire lore; it is death that denotes the beginning of a vampire’s immortality.  Therefore, it’s only fitting to mark the 100th anniversary of the death of Irish author Bram Stoker, whose characterization of Dracula was the vampire who spawned all others.  Although he died one hundred years ago April 20th, much like Dracula, he lives on.

As nearly everyone knows, there’s no shortage of vampires in pop culture today–from Twilight to True Blood, readers cannot seem to get enough of the undead. Do we have Stoker to thank (or to blame) for the overwhelming popularity of the vampire in literature? Although the myth of the vampire dates back to the 15th century when Vlad the Impaler, son of Dracul, whose reputation for sadistic killings inspired the story, Stoker’s Dracula, published in 1897, is often regarded as the archetypal vampire novel.

Museum exhibits, interdisciplinary conferences and events honoring Stoker’s centenary are being held throughout the year all over the world, including Dublin (where Stoker was born and educated) London and Salt Lake City. Vampire-themed conference topics like “Vampires and/as Science” and “Bram Stoker and Gothic Transformations” will take place at Trinity College and the University of Hull, respectively. Trinity College will also hold a separate Bram Stoker Centenary Conference this summer which focuses on the life and writing of the author, who graduated from the school in 1870.

Fans of the vampire genre and Gothic era can to pay homage to Stoker by taking in the vampire themed cruise, Vamps at Sea.  The Alaskan cruise honoring Dracula and his contemporary fanged bedfellows sails roundtrip from Vancouver this summer.  Special guests on Holland America’s week long voyage include John Edgar Browning, an expert on vampire lore whose forthcoming book focuses on Dracula and vampires in visual culture.  C.J. Ellisson, author of contemporary vampire stories targeted to the over eighteen set, will also be on board.  (The cast of Ellisson’s VV Inn series would make even the palest Twilight vamp blush.)  Another fitting guest rumored to make an appearance is Dacre Stoker, Bram’s great-grandnephew.

At the World Horror Convention, held this past March 31st, the Horror Writers Association also honored Stoker’s memory by giving away the “Bram Stoker Vampire Novel of the Century Award.” Richard Matheson’s 1954 novel I am Legend beat out Salem’s Lot by Stephen King and Anne Rice’s Interview with a Vampire for the title.  Upon winning the award, Matheson indicated that he was influenced by Stoker’s novel and its film adaptation.  Of his first experience with Dracula he states that “even as a teenager, the thought occurred to me that if one vampire is scary, what if all the world were full of vampires?”  Now, more than ever, it appears that his question has been answered.  Vampires are inescapable in popular culture, and none more infamous than Stoker’s Dracula.  So on April 20th, sleep until dusk, avoid garlic and raise a glass of red wine to Mr. Stoker.  Although he may have died one hundred years ago, not even a stake to the heart can snuff out his legacy.