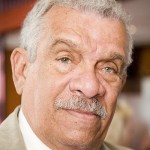 We’ve celebrated African American and African writers, so now it’s time to look to the Caribbean.  Usually, people think of palm trees, flawless beaches, aqua waters and beach-side resorts.  The Caribbean islands certainly have all of that, but they also hold a great literary tradition.

I was introduced to Caribbean writers during my semester abroad at the University of the West Indies or UWI (pronounced “you-ee”) in Cave Hill, Barbados in 1999.  I took a class with a flaming, red-haired, white Jamaican professor.  I thought it funny, a little white woman with a huge Jamaican accent resounding throughout the lecture hall.  It was she who introduced me to one of my favorite books of all time: Annie John by Jamaica Kincaid, an author from Antigua.

Several years later in Boston, while taking a grad class at Harvard, another professor introduced me to V.S. Naipaul, a courageous writer from Trinidad.  I had been to Trinidad several times, staying with a Trini family, so I knew firsthand the racial mixture Naipaul speaks of.  Trinis have ethnic roots from Africa, India and native Carib tribes, making them a culture of physically stunning people. Naipaul, an East Indian Trini himself, traveled to India to discover his roots and courageously wrote about how disgusted he was with the country.

Derek Walcott, a poet from St. Lucia who recently won the T.S. Eliot Prize for Poetry, is also a controversial figure.  His reputation is marred by accusations of sexual harassment from female students.

So whichever author you chose to read, or if you choose to read all of them, remember the Caribbean is a magical and literary place.

The Helen of the West Indies: Derek Walcott’s St. Lucia

Behind The Article: Anne Frank Lives On