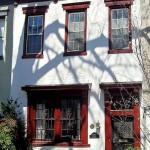 Who embodies the Harlem Renaissance more than any other writer?  Langston Hughes, of course.  This black poet created not only inspirational poetry, but poetry that is cool. Langston’s poem “Harlem” (more popularly known as “A Dream Deferred”) has been made into a Broadway stage play and a feature film.  Both adaptions have starred major black entertainers such as Phylicia Rashad, Sean “P. Diddy” Combs, Sanaa Lathan and Audra McDonald, thus carrying on the Harlem Renaissance tradition.

The poem “Harlem” continues to inspire a whole new generation of Americans with its jazzy rhythm and lyrical beats.  Perhaps this is arguably one of the most famous lines in American poetry to date:

What happens to a dream deferred?

Does it dry up
like a raisin in the sun?

The Harlem Renaissance continues to live on at Literary Traveler with our three articles featuring the great poet, Langston Hughes.  We have Hughes in Harlem, Hughes in Washington D.C. and even Hughes in Turkmenistan … with a surprise ending?!

Celebrate Black History with LT.  Happy Reading to all …

The Harlem Renaissance, Washington DC And The Rise of Langston Hughes

From Turkmenistan to America: How I Found Langston Hughes