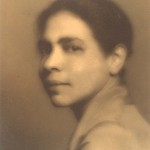 As a black woman who was coming of age in the early part of the 20th century, it was hard for Nella Larsen to understand where she fit.  Her mother was of Danish descent, a white woman, and her biological father was of West Indian descent.  If you think about Larsen’s unusual background, you realize how difficult it must have been for Larsen to be of mixed race in the early 20th century.

To compound her identity crisis even more, Larsen’s mother could not deal with raising an obviously black daughter.  Sadly, she separated herself from Nella for most of Nella’s life.  Somehow through the pain and tragedy, and even a very personal identity crisis, Nella Larsen flourished into one of the great Harlem Renaissance writers with her book Passing.

In Passing, Larsen shapes the psyche and identity of the black female.  She was one of the first to do so, thus giving readers today a historical insight into the black female of the early 20th century and Harlem Renaissance.

To read more about Nella Larsen’s fascinating life and identity issues, take a look at Discovering Parallels to Nella Larsen.

Behind The Article: Oscar Wilde at Pere-Lachaise