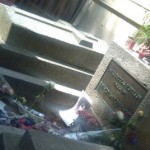 Our latest article, Jim Morrison & Lipstick Kisses at Oscar Wilde’s Pere-Lachaise, is very rock-n-roll.  Wilde was flamboyant, fun-loving and ostentatious, so why not be buried in Pere-Lachaise Cemetery in Paris, France, along with other celebrities such as The Doors Jim Morrison, Chopin, Proust and even Edith Piaf?

Oscar Wilde found a resting place that suited him.  He is buried in a grave that is adorned by literary fans and fans who just want to leave their lipstick kisses on his tombstone.  Kevin E.G. Perry, the writer of the Oscar Wilde article, completely agrees: Oscar is living in death, the way he loved living in life.  And good for him.  We should all be so lucky.

A new literary tradition we’re trying at LT is to go “Behind The Article.”  Now you can read more fascinating tidbits and observations about the writer and the place … things that weren’t included in the article.  For this blog post, we asked Perry a couple of questions that we’re sure our readers would love to know.

Literary Traveler: We hear you visited Edith Piaf’s grave as well.  Did it evoke any different emotions than visiting Wilde’s or Morrison’s graves?

Kevin E.G. Perry: Edith Piaf’s grave is very close to Wilde’s, but it’s an altogether more modest affair. It’s a family plot which displays only the inscription ‘Famille Gassion-Piaf’, and you’d easily miss it if someone hadn’t attached her photograph. This simplicity and the fact that it is set back away from the path seemed to add to the air of reverence that surrounds it–and makes it even more startling to think that when she was buried there, over 100,000 mourners attended the ceremony.

LT: Can you tell our readers a little more about The Doors fans at Jim Morrison’s grave?  How many fans were there?  Did you find the experience overwhelming or overly-touristy?

KP: On the day I visited Pere-Lachaise there were six or seven Doors fans who seemed to be spending the day at Jim Morrison’s grave, quite apart from the ebb and flow of other cemetery visitors. They were smoking cigarettes and playing music at a low volume–the latest torch holders in a perpetual vigil that has lasted almost 40 years.

We hope you enjoyed this first installment of “Behind The Article.”  We’ll keep them coming.  In the meantime, please enjoy Oscar Wilde at Pere-Lachaise.