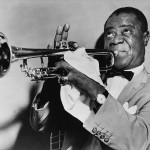 Harlem is a place that is so closely imbued in the hearts of Americans everywhere.  Even tourists from around the world come to see the streets of Harlem, a once Mecca to the black artist, including the black writer.  What arose from the Harlem Renaissance was a beautiful, literary tradition of African American stories, storytelling and history.  Langston Hughes, Billie Holiday, Duke Ellington, Ella Fitzgerald, Nella Larsen, Carl Van Vechten, Countee Cullen, Louis Armstrong, Zora Neale Hurston … these are the names of the Harlem Renaissance.

Can you imagine going into a club in Harlem in the 1920s-30s and seeing Louis Armstrong blow on his trumpet or Langston Hughes reading his poem “Harlem” a.k.a. “A Dream Deferred”?  This era was magical, never to be repeated as of today, sadly enough.  But the magic still resounds in the streets of Harlem.  The people there haven’t forgotten where they come from.  Even though there are now more white people living in Harlem than black.  Even though Harlem has pretty much underwent gentrification.

The memory of the Harlem Renaissance exists.  You can find it on amateur night at the Apollo Theater, in the spirit of the Harlem Globetrotters (originating in 1926) and the smooth jazz and blues songs of Black Swan Records.  I hope to find it myself in a couple weeks as I head to Harlem to eat at Sylvia’s, a historic restaurant owned and run by Sylvia Woods, the “Queen of Soul Food,” since 1962.  Everyone who is someone has eaten there, including President Bill Clinton, Nelson Mandela, Susan Lucci, Magic Johnson and many more.

So explore Harlem with us with these two articles that give you the grand tour of a place imbued with literary spirit and black pride.

Behind The Article: Oscar Wilde at Pere-Lachaise