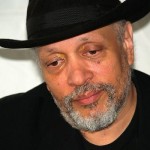 He’s the guy wearing the fedora.  He’s the guy who looks black, but actually comes from an extensive history of Jewish Eastern Europeans.  He’s also the guy who explores American black culture in his mystery series with star detective Easy Rawlins.

Of course, we’re talking about none other than Walter Mosley.  In continuing with Black History Month, we’re honoring Mr. Mosley by celebrating his multicultural roots.  Not many writers, let alone people, can talk about what it’s like to grow up both black and Jewish, but Mosley can.  He embraces both cultures in his writing, including when Easy Rawlins spies on a Polish-Jewish communist in A Red Death.

Interestingly enough, Mosley grew up in notorious Watts, California–a city known for its violent and explosive racial tensions.  Somehow the writer sidestepped all the negativity and turbulence and let his imagination run free as a child.  Fortunately for 12 year-old Mosley and his parents, they moved to an affluent Los Angeles suburb in 1964 … only a year before the horror of the Watts riots.

Today, he is a man of great importance, not only in the writing world, but he is also known for his literary editing skills as well.  For a man who started writing late in life–at 34 years of age–he’s become a favorite of President Bill Clinton and Denzel Washington has played Easy Rawlins in the movie adaptation of Devil in a Blue Dress.

Therefore, we celebrate Walter Mosley and all his accomplishments, proving that being both black and Jewish is a beautiful thing.