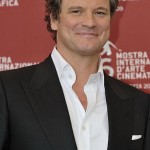 Colin Firth is certainly a handsome brooder.  He’s made his mark on literary television when he played the always brooding Mr. Darcy in the BBC miniseries of Jane Austen’s Pride and Prejudice.  For those of us–especially the ladies–who remember this epic series in 1995, we all remember Colin Firth’s scene stealing dark glares.

Firth has made quite a bit of money off of the literary.  In fact, he played the modern version of Mr. Darcy as the character of Mark Darcy, a lawyer from a well-established, British family, in Bridget Jones’ Diary.  The movie was a modern and quirky adaption of Pride and Prejudice.  Firth then continued his literary movie success acting in hits such as Shakespeare in Love, The Importance of Being Earnest, Dorian Gray and A Christmas Carol.

For anyone who has seen Colin Firth in his latest movie, The King’s Speech, you’re probably not surprised to hear he’s a favorite to win the Oscar for Best Actor.  The King’s Speech is not exactly literary, but it is historical.  It keeps in line with Firth’s career, which is to put quality over anything else.

So what do you think, will Colin Firth win the Oscar?

Writers of the West Indies