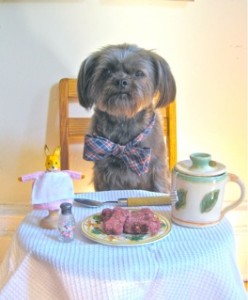 Linda Olle’s alter ego Parsley Cresswell is an intriguing character. Glamorous, yet frugal, evasive, yet conspiratorial, she’s the perfect guide to New York’s Upper East Side. Like Parsley, Olle is an avid birder, and the Upper East Side Cookbooks are a little bit like bird-spotting guides you might take with you to a café, while you sip and observe the neighborhood’s characters.

They’re also scrapbooks of tips on how to enjoy life and literature in a wealthy neighborhood on a budget. When WNYC’s Brian Lehrer asked Olle how she differed from her creation, she said coyly, “well, I don’t wear furs.” She does however forage for mushrooms and Gingko nuts in Central Park. And like Parsley, who manages to be both spontaneous and organized, she advises using caution and proper gear.

Linda Olle blends the drama of Parsley’s life with practical tips from her own experience living on the Upper East Side. The combination of humor, rumor, recipe and literature is a really unique way to be introduced to a neighborhood.

Literary Traveler: What is it that makes artists and writers like yourself want to stay in the Upper East Side, despite the cost of living there?

Linda Olle: If you got your apartment a long time ago, your rent is probably cheaper than in the Bronx. I signed my lease in 1981. It’s quiet here and the architecture is spectacular. There are lots of restaurants and few places to food-shop. I wanted to write about this oddball neighborhood, and there had never been a regional cookbook of the UES.

LT: Do you think the recession has changed the habits of wealthy Upper East Siders, or is it just freelancers like Parsley who’ve had to tighten their belts?

LO: Honestly, I cannot tell. I hear rumors of penthouses in foreclosure. Though I bill myself as the Queen of the Upper East Side, and my twitter is CarnegieHillian, I don’t know how neighbors manage at all.

I assume they’re like Mitt Romney and have their billions stored offshore, tax-free. Some of my neighbors are cool people and support good causes. It’s mostly Democrat. I don’t begrudge my neighbors their money, I just wish they’d forked over the taxes to help out their fellow man.

LT: Eric Arthur Blair (A.K.A. George Orwell) is one of Parsley’s favorite literary personalities – and seems to influence her philosophy. Which non-food related author has influenced Parsley’s cooking the most?

LO: The news stories of Martha Stewart spending 5 months at Federal Prison Camp Alderson, in West Virginia, fascinated me. She was able to make crème brûlée in the prison microwave. In Volume 3 of the Upper East Side cookbook series, Parsley Does Thyme, to be published on December 6, 2012, Parsley Cresswell is in prison and manages to make chocolate soufflé in a mug and microwave banana cake. She meets a serial killer who murdered two fiancés who stood her up at the altar: “Julienne made the roasted chicken with lemon and garlic dish called Engagement Chicken with Marry Me Juice for each of her serial boyfriends. She served it with Dutch beer and a salad called Lettuce Alone.” (page 52, Parsley Does Thyme.)

Hemingway’s A Moveable Feast and Orwell’s Down and Out in Paris and London influenced me. Eric Arthur Blair (A.K.A. George Orwell) had a job as a waiter at a restaurant in Paris, found himself working “seventeen and a half hours” a day, “almost without a break.” It prevented him from eating an expensive restaurant meal ever again: “I can point to one or two things I have definitely learned by being hard up. I shall never again think that all tramps are drunken scoundrels, nor expect a beggar to be grateful when I give him a penny, nor be surprised if men out of work lack energy… nor enjoy a meal at a smart restaurant.” (from Down and Out in Paris and London)

LT: I know that Parsley adores Julia Child – but in the Upper East Side Main Course (Vol 2.) I was surprised to learn that her accountant/neighbor/biographer doesn’t ‘get’ her. Does this reflect your mixed feelings about Julia Child – or do you, like Parsley, make the sign of the cross when her name is mentioned?

LO: I revere her and grew up loving her TV show – everybody did. She was a hoot! Yet I rarely refer to Mastering the Art of French Cooking. It’s not the most dog-eared cookbook in my collection.

I met Julia Child in 1995, at her home in Cambridge, with my friend who went to the Cordon Bleu. It was about the best day of my life to sit listen to them talk about Paris. She served smoked salmon and dill sandwiches and champagne. Julia’s girlfriend played the piano. It was a sparkling couple of hours. I was higher than a kite.

LT: Parsley’s thriftiness seems to have been born out of her Midwest farming background. But I also notice allusions to the kind of super-organized hippie cooking of the 70s Superwoman. What do you think of the Superwoman model of housekeeping? Do you reckon it’s making a comeback with the recession – and is it sustainable in a tiny city apartment?

LO: The 70s Superwoman was barefoot in the kitchen, made her own bread, wore her hair down, drank cheap red wine, smoked a joint while she cooked. Parsley is that, but actually more of a 50s hostess who takes pains. If you visit her, you’ll find her refrigerator stocked with paté, a selection of cheeses and raw vegetables, and paper-thin rice crackers, capers, and olives. Served by candlelight.

Come to my house and you get a cup of tea and cookies from the store if you’re lucky. I’m an insecure cook, but I aspire to be a 70s hippie, who puts out a fantastic one-dish meal, with crusty bread, and vegetable side dishes, with sensual pleasure and little effort.

LT: I’m sure other readers, like I did, will wonder which anecdotes are true or not. A few of them are so priceless that I just have to ask… I’m thinking of the very Upper East Side moment where a toddler with his nanny mistakes Parsley for his mother, because she is blonde. Or when the 80 year old neighbor who made his way down 80 flights of stairs during the Twin Towers disaster is greeted with cookies, freshly baked by Parsley…

LO: It’s so interesting you ask that. Like Parsley, I have almost an almost unhealthy fixation with Bob Dylan and George Orwell. I have a lot of friends who are writers, and a bookshelf full of intriguingly inscribed books. Here is a preview of volume four of The Upper East Side Cookbook: May I Have a Doggie Bag?: Parsley will be so destitute that she sells off the books, one by one, on eBay.

I too get my clothes second-hand at church bazaars and rummage sales. You can get barely worn expensive clothing at Upper East Side churches. These sales are so popular that their dates are more or less secret. My excellent winter coat came from the Church of the Heavenly Rest on Fifth Avenue. There was a wrinkled twenty-dollar bill in the pocket – more than I paid for the coat. These Ferragamo shoes are from the Brick Church, between Park and Madison, where there’s a sale next weekend. I got a cashmere sweater from St. James Episcopal on Madison – the next one, November 16, is marked on my calendar.

The experience of being mistaken by a toddler for his mother happened to me three times in Central Park—with different children. I was in my twenties when I first moved to New York from Wisconsin. I’d be sitting on a park bench, reading. The child toddles up and shyly says, “Mommy?” Nannies on the Upper East Side are usually black. The baby has spent most of his life with the nanny, and rarely sees his mother—who is likely a blonde like I am. The kid looks at me, questioningly. I’d be smiling back and shaking my head “no,” but that only makes him more convinced that I’m his mother. When I give this rather poignant experience to Parsley, I can see the humor in it.

Yes, I know of an 80-year-old man who survived the World Trade Center bombings walking down from the 80th floor, and he walked all the way home to the Upper West Side. His neighbor greeted him with some freshly baked cookies. Talk about the restorative powers of baking!

Parsley’s esthetic is more European and Japanese. I spent a lot of time in the U.K. and in Japan. I’m not a 50s or 70s Superwoman, just a traveler who likes to eat wherever she goes. I’ve eaten fabulous meals in Japan, North Africa, Spain Italy, France, and especially, in London, Edinburgh, and Dublin. 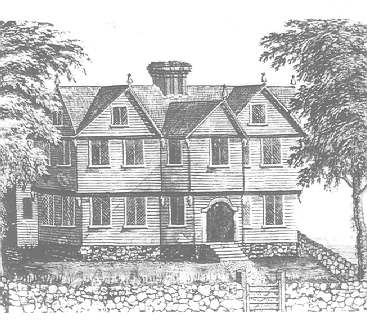 The Salem Witch Trials: A Retelling and Commentary