After reading about Kat Clay’s cross country road trip in our September 24th article, “Jack Kerouac and John Steinbeck on the Californian Coast,”  we couldn’t wait to chat more with the author about her incredible experiences and how her literary predecessors paved the way for her own adventure.

Literary Traveler:  What was it about Jack Kerouac’s cross country journey that initially drew you in?

Kat Clay:  It’s the sense of freedom you get from his novels. There’s a grand sense that everything will work out, as if time stops for these young people to get on the road. I’ve always longed for that kind of freedom. The books are almost fearless; there’s no worry about getting mugged or losing your passport. Kerouac paints a picture of America that captures an era when people were making their own rules. The messages of his books still ring true today.

LT:  How has Highway One changed over the years?  What can travelers expect as they traverse it on road trips today?

KC:  Highway One has become busier, that’s for sure. When we drove it there was a lot of road work around Big Sur, which slowed the traffic down to 25 MPH. It’s not good for your sanity to drive around winding roads at a snail’s pace! And road trips themselves have changed – we now have GPS units to help instead of maps, but I think that’s a good thing. Many a marriage has been saved by the GPS. But there are still places on Highway One that haven’t changed at all. I remember stopping in at a general store when we got lost that was straight out of Jaws. There are still 1950s bungalows and weatherboard shacks. The state parks still have the same coastline. And the fog is most definitely still there.

LT:  While Kerouac’s words can’t replace the personal experience, literature seems to have a unique way of representing the magic of place.  If maps, as you so eloquently put it, “are statistics of natural beauty,” what is literature?

KC:  Good literature will always capture the feeling, the nostalgia and the wonder of a place. I could read a book and imagine a place completely different from how the author has described it, but still get the same sense that the author felt in that moment.

And good literature can somehow capture a part of you that can’t be expressed. It’s incredible when a writer connects with your soul, as if they are writing just for you and you alone. My writing instructor told me that every writer is looking for their perfect reader. I think when you discover your perfect writer you need to hold onto them!

LT:  You talk about the limited power of photographs.  Do you think writing helps to preserve aspects of a powerful experience where a camera may fail?

KC:  One of the most important lessons I’ve learned as a photographer is to know when a moment is simply there to be enjoyed. Writing helps capture the spirit of place, which is infinitely more difficult to do in photography. While photography can capture the intricate details of a rock, writing can compare it to the texture of a mottled ostrich egg.

But for me, writing and photography are inextricable. On display in the art gallery in Jackson, Mississippi are some of Eudora Welty’s photographs – who knew she was a photographer as well as a writer? She inspired me, because I’ve always struggled with the thought that I might need to separate my two passions in order to have a career in one. Lewis Carroll was also a prolific photographer. I think the two art forms compliment each other perfectly; photography is a wonderful tool for documenting moments to inspire later writing. I use it as much as I would take notes.

LT:  What are some of the other highlights from your trip across America?  What was the most inspiring thing you saw or experienced during your travels?

KC:  Can I say the whole trip? Three months in the states is a long time! The southwest National Parks are incredible reminders of our own small place in the universe. I fell in love with Utah. I also got to celebrate many of the American holidays that we don’t have in Australia, like Halloween in New Orleans and Thanksgiving in New Jersey. One particular highlight was giving an impromptu rendition of Johnny Cash’s Ring of Fire in a Louisiana Cajun Café.

The most inspiring moment: One of my husband’s relatives is a flight instructor and he took us up in his Cessna over New York City at night. I got to co-pilot the plane. It was incredible and also very moving to fly over the city.

If you’d like to read more, my husband and I documented our USA trip (and our continuing travels) on our travel website, Two Monkeys in a Tent.

LT:  Navigating roads once traveled by Kerouac and spending the night in a campground once frequented by Steinbeck seem like incredibly profound experiences.  How did the knowledge that you were following in the footsteps of these literary greats impact your experience?

KC:  Traveling to these places made the books more real for me. I think it’s important not just to follow the same paths as writers like Kerouac, but instead to pursue the same spirit. For me following in their footsteps wasn’t always a literal go-here-do-that, it was also a spiritual pursuit at emulating that great sense of freedom you get from being on the road in America.

With Steinbeck it was the opposite. A month after Highway One I was reading Travels With Charley in Search of America and I realized we’d stayed in the same place as Steinbeck. It was an epiphany, because I had felt the same as he did atop Fremont Peak. He also expressed a lot of my feelings about traveling in America.

LT:  It seems as though Kerouac acted as a muse of sorts in inciting your desire to drive across America and take your own journey.  What advice do you have for literary travelers looking to find their own travel inspiration?

KC:  Take inspiration from literature to blaze your own trails. The most important lesson I learned from Steinbeck and Kerouac was to break free of expectations.  Break free of the clutches of television and social media— because someone’s status update about being stuck in traffic seems pointless when you’ve just seen elks playing in the sunrise over Yellowstone Lake.

I met a lot of people in America who were amazed by our trip and wished they could do something similar, but there was always an excuse. My career won’t survive.  I don’t have the money . I’m going to do it when I’m old.  Do you know what the RV crowd told us repeatedly on our trip? You’re so lucky to do this when you’re young.

The same goes for writing. If you’ve ever longed to be a writer, you need to travel. Gather experiences— experiences are more valuable than any graduate school. I love reading stories of how writers became writers, and for many of them it was the experiences that made them. Try reading about James Ellroy’s road to publication, which involved stealing ladies panties and passing out in a public park (I don’t suggest you emulate this!). Travel is an investment in yourself and your person. You can’t put a price on that.

LT:  I think I have just found my travel inspiration in this interview! Thank you for taking the time to share your experiences with us.  Readers, check out more from Kat Clay at her fabulous website and then power off your computer and find your own adventures. 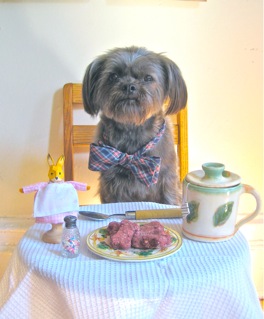 Interview with Linda Olle, Author of the Upper East Side Cookbooks