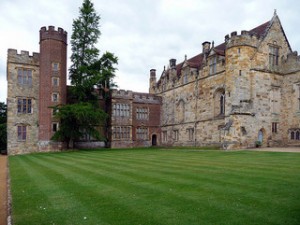 Take a glance ‘behind the article’ as Literary Traveler  speaks with Ann-Maureen Owens, author of our July 16th article, “Rediscovering Sir Philip Sidney at Penshurst Place.”  After reading about Shakespeare’s brilliant and yet largely unexamined contemporary, we couldn’t wait to dig a little deeper into the writer’s history, his family home and what accounts for his absence from academia.

Literary Traveler:  How did you first become interested in Sidney?  What drew you to him?

Ann-Maureen Owens: As an undergraduate in the late 70s, I was introduced to Sidney as a man of action: diplomat, politician, and soldier, maybe even a spy!  He had planned to accompany Francis Drake on an adventurous expedition to America when Elizabeth I required his services in Europe. He was also a patron of other writers and had a finely tuned artistic sense and eloquent writing style but wrote for himself, his family and friends. He packed all this into a short life, Only two of his poems were published before he died, gallantly, at age 32, but he was so well regarded in literary circles so as to be considered “a poet’s poet” and the posthumously published Arcadia, An Apology for Poetry and Astrophel and Stella were held in high regard.

I considered Sidney to be an exciting figure of the English Renaissance, but as the title of my article suggests, I had not paid particular attention to him – Shakespeare dominates our idea of that period now – until a country walk outside London brought me to Penshurst Place.

LT:  What do you think accounts for Sidney’s absence from the majority of college curriculums?

AO:  There are many writers and works vying for inclusion in the current undergraduate curriculum and it may well come down to the preferences of professors or their need to attract students in the postmodern era. My son, Kevin, just completed an English degree that, except for a few foundation courses, concentrated on works of the last two centuries. Another son, David, certainly did not meet Sidney on his English survey course in college.

LT:  If you had to suggest one of his works for an undergraduate English Renaissance literature class, which would you choose?  Tell us a little about your choice.

AO:  The sonnet cycle, Astrophel and Stella, is my favorite and it is perhaps the most accessible to younger readers. It is an unfulfilled love story about the one that got away, modeled on Sidney’s own experience. It show’s Astrophel’s discovery of what it is like to fall in love with the immediacy of the present tense, and previews the dramatic speech of the Elizabethan stage.

LT: Penshurst Place seems like an incredible site to experience first hand.  Do you think reading Sidney prior to touring the property enhances the experience?

AO:  It is a beautiful place with extensive grounds, well-tended gardens and an amazing house that anyone can enjoy in many different ways. However, it certainly helps to appreciate the history of the writer’s home, which is still owned by the Sidney family, if one is familiar with the man and his work.

LT:  Besides Penshurst Place, do you have any off the beaten path suggestions for literary travelers visiting the London area?

AO:  I have written another piece that is to be published by Literary Traveler about Down House in the village of Downe, Kent, where Charles Darwin wrote most of his scientific books. It is within the London circular M25 and buses run from South Bromley rail station.

I can also recommend the recently refurbished William Morris Gallery in Walthamstow, North-east London. Once the childhood home of this writer and artist, it is situated in the grounds of Lloyd Park and can be reached by way of the Victoria Line on the London Underground.

LT:  You are an author of non-fiction children’s books about Canada.  Do you have any books in the works right now?

AO:  Besides a children’s picture book that is currently under consideration by a British publisher, I am working on two at the moment. One is a biography of Frances Ann Hopkins, whose paintings of fur-trading voyageurs are so iconic and the other is about bird science, co-authored with my wildlife biologist son, Luke.

LT:  Would you ever consider writing about Renaissance England?

AO:  Yes, I would, as it was a fascinating time in England, a place close to my heart where I lived for three years and continue to visit my eldest son, Brian, his wife, Abby, and my granddaughter, Ivy.

The Tudors were on the throne, politics revolved around exploration and sea power, and then there were the writers: Spenser, Shakespeare, Donne and Ben Jonson – who wrote an “Ode to Penshurst Place” – as well as Sidney. Quite a gold mine for a writer interested in history and literature!

LT:  So, on the subject of the chivalrous knights and courtly love, is chivalry dead?

AO:  Not dead just transformed to reflect the realities of our current age. Now it means being kind and courteous to anyone, whether there is a romantic interest involved or not. Romantically, it can be practiced by men and women, and works best as a two-way street. Chivalry occurs when we reject self-centeredness to put another’s comfort and wishes ahead of our own, showing appreciation when someone treats us in this way.

LT:  Beautifully stated. I agree that there is far more to the concept than having doors held open.  Thank you so much for taking the time to chat with us.  I know that our Literary Traveler  readers look forward to hearing more from you in the future.