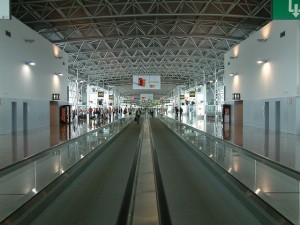 When I read, in some travel blog or another, that Amsterdam has one of the most comfortable airports in the world — couches for napping during layovers, 2 Euro showers, stands selling Belgian waffles and peanut-butter-dipped fries — I stopped worrying about finding a hostel over Halloween weekend.  In fact, I wondered why people bothered to book hostels.  Some fellow literary nerds squeed over the possibility of staying overnight in Paris’s Shakespeare and Company Bookstore.  Despite the intensity of my Beauty-and-the-Beast-inspired library fantasies, dozing in a transportation hub took a close second.

So I was disappointed by the metal seats, the florescent lights, the loudspeaker announcements every five minutes, and, after 4:00 a.m., the airport guards who explained that, if I continued to occupy more than one seat, I could be charged with vagrancy.  In my youthful folly (ah, to be 19 again), I’d missed a crucial detail: the perks of air travel were limited to ticketholders.

This experience hasn’t diminished my dreams of airport occupation, though.  When there’s a weather emergency, or when I watch Independence Day for the millionth time, I remember Jeff, who confessed, during an Agnostic Club meeting in college, that he went to airports on Thanksgiving to people-watch, to imagine himself in their families, their communities.

Everyone traveling by airplane is in a state of transition in the terminal, separated from most of their possessions, acquaintances, and surroundings.  Unless they’re hiding out in the Red Carpet Club, they’re subject to the same sterilized, scrutinized, Starbucks-packed otherworld that I am.

Alain de Botton, a French philosophy student gone culture critic, knows what I’m talking about.  He chronicles the week he spent in London’s Heathrow Airport in his creatively-titled A Week At The Airport.  As the airport’s Writer-in-Residence, he had unfettered access to air traffic control towers, baggage handlers, and, yes, the first-class lounge.  Critics are calling it an essay collection, a meditation on a non-place.

I’m calling it the cheapest route to an extensive stay in one of my favorite places.

The Kindness of Strangers: Couch-Surfing and Meditating in Hervey Bay