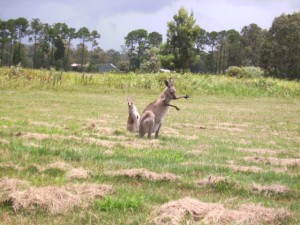 Literary Traveler always benefits from the addition of new voices.  Today, we are excited to welcome Elisha Adey to our community.  Elisha is an experienced traveler – she has backpacked all over Europe and Australia – currently living in Austin, Texas.  She is also the founder of the website SoulSpeakOut.org.  In our first post, Elisha takes us to the back roads of Australia, where she learns about pushing her boundaries and herself through adventurous travel and guided meditation.

After a 24 hour bus-ride to a foreign place, there’s nothing more comforting than being greeted by a smiling local in a mud-spattered jeep.

My traveling partner and I spent our first day in Hervey Bay, Australia driving around with our couch-surfing host, Jamie, visiting his favorite coffee shops and swamps. Earlier, he had described the swamps with such enthusiasm that now we didn’t feel like we could grimace at the smell of the green muck creeping into our flip-flops. He pointed out highly venomous spiders everywhere.  When we asked him if he checked his shoes before putting them on, Jamie laughed and said, “Of course not, you can’t live in fear.” So when a green ant bit my foot I desperately tried to hide my exaggerated, American fear of Australian wild-life and resisted the urge to fall down and grab my throbbing toe.

By the time evening came along, pretty much every word out of his mouth fascinated us. Sitting on his couch that night he told us about his experiences with Vipassana meditation. He learned about Vispassana meditation in a 10-day focused course, which he described as the most powerful and trying time of his life. The silent meditation connected him to his body and mind in a way he’d never experienced. On day 6, the meditation had brought up childhood trauma. He said it felt like his arms were being beaten with baseball bats while he sat there with his eyes and body closed.

Fascinated with the potential for a better understanding of ourselves, we signed up for the Vipassana course as soon as we got home, convinced that we’d tapped into something life-changing. Sitting in Jamie’s living room, we contemplated the unspoken formalities that come along with spending the night on someone’s couch for free (doing the dishes, cooking dinner, replacing food in the fridge) but they all seemed to fall short. He had given us a gift bigger than his space, more important than his time.  A couple of months later, after we’d both completed the meditation course, we sent him a message letting him know he’d introduced us to something life changing. He responded simply, “Pass it on.”

Red Eye: My Weakness for A Week in the Airport

Behind The Article: Colin McPhee in Exotic Bali