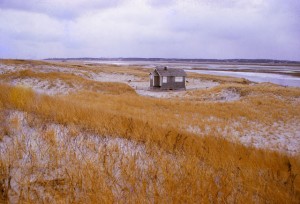 It is here at Eastham beach on Cape Cod that Henry Beston found his first refuge, in a house that he had built for himself after returning, weary, from WW1.  One September in 1926, Beston came to this retreat – which he called the Fo’castle – and stayed on as autumn turned to winter.

Beston wrote, “the fortnight ending, I lingered on, and as and as the year lengthened into autumn, the beauty and mystery of this earth and outer sea so possessed and held me so that I could not go.”

During this time, he observed the cycles of nature and compiled many of the writings that would make up his classic memoir of the seasons, The Outermost House.

When he returned from Cape Cod in September 1927, Elizabeth Coatsworth was waiting for him, and he married her in 1929. Unlike Beston, who wrote slowly and painstakingly and liked to put down deep roots in beloved places, Coatsworth was a prolific writer and traveler.

Their Maine farmhouse was the inspiration for Beston’s other well-loved book, Northern Farm. But it is The Outermost House that stands out – as his daughter Kate has suggested – as the main contribution that Beston would make to a society which he felt was losing its connection to nature. In Beston’s graduation book, a college friend summed up Beston’s love of the natural world with a cartoon imagining of Beston’s gravestone, engraved: “He Hated Machines.”

Beston took Elizabeth to the Fo’castle for their honeymoon, but after their marriage, his base was in the Maine homestead of Northern Farm, with his wife and two children. Even in his family home, he preferred to work in solitude. His year in solitude at the Fo’castle would always be the template for his difficult, yet contemplative path as a writer.

Beston is a nature writer in a great American tradition, from Thoreau to Rachel Carson – though he himself was not sympathetic to Thoreau, finding him too “cold”. But Rachel Carson – like Beston, a passionate advocate for environmental conservation – was a disciple, and later a friend.

The Fo’castle was used by the Audobon society until it washed away in a storm of 1978, but the Beston society is hoping to rebuild it.