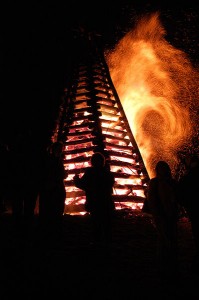 Halloween’s literature illustrates the tradition’s evolution through a convergence of cultures. The festival dates back to an ancient Celtic tradition celebrated on October 31. The Celts celebrated a festival called Samhain to mark the end of the final harvest. Food was in surplus as death lingered in the chilly fall air. These contrasting circumstances may be understood as the reason the Celts believed Samhain was the time when the veil between the dead and the living was at its thinnest.

Celtic and Christian cultures merged as Germanics began to populate Ireland and the British Isles. Christians celebrated Hallowmas, old English for All Saints Day, on November 1. All Saints Day was a time to remember the dead through prayer. Influenced by the Celtic idea of otherworldly contact, Christians felt that their prayers for the dead would be most effective if sent on the day when the spiritual world could be breached.

The tradition that took place on the Eve of All Hallow’s Day became known as All Hallows Eve. Merging two cultural perspectives on the same day, All Hallows Eve used the idea of the “otherworld’s” proximity and reverence for the dead to create the foundations for a festival we call Halloween.

Centuries of cultural confluence created the modern Halloween of costumes, jack-o’-lanterns, and candy. Ideas about religion, culture, and modernity have all influenced the tradition, but one theme has remained through it all. Halloween is the day the portal that separates the living from the dead is peeled open and the two worlds are believed to interact.

Mirrors are not often associated with Halloween, but, in literature, the two are thematically connected. In literature, mirrors are used to represent portals to other worlds. Mirrors are central in Bram Stoker’s Dracula, Lewis Carroll’s Through the Looking Glass, Brothers Grimm’s Snow White, Oscar Wilde’s The Picture of Dorian Grey, and J.K. Rowling’s Harry Potter series. Though mirrors are rarely used in direct reference to Halloween, they have been used in literature to provide a physical divide between the living and spiritual worlds.

Halloween is the day when that divide is believed to be as thin as the pane of glass used to represent it. This Halloween, most mirrors will be used for admiring our creepy, bizarre, and often revealing costumes, but beware the few that may become the doorways for the encroaching unknown.