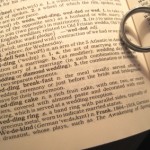 Vladimir Nabokov, the scandalous author of Lolita and The Original of Laura, will have his love letters to his wife Vera published in 2011.  His son, Dmitry, found the 300 unpublished letters in Vera’s archives.  However, Vera destroyed her own letters to Vladimir.  The author died in 1977, so this is quite a discovery for the literary community.

The love letters will be published in English sometime in 2011, hopefully around Valentine’s Day.  For those who read Russian, the letters were published in the Russian magazine Snob in mid-November 2010.

Translated from Russian, a language known for its terms of endearment, readers should expect a romantic and passionate side of Nabokov.  In one excerpt published in The Independent, Nabokov writes:

“How can I explain to you, my joy, my golden one, my heavenly happiness, just how much I am fully yours …”

In anticipation of the publication of Nabokov’s love letters, please enjoy an interview and two articles about the legend himself:

In Search of Vladimir Nabokov in St. Petersburg, Russia

Vladimir Nabokov in the Grand Canyon & the Discovery of Butterfly Neonympha

Exploration of the Sutro Baths