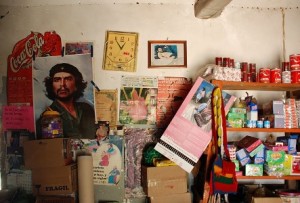 Author Stephen Eisenhammer decides to follow the trail of his personal hero, Che Guevara, who was captured and executed in the South American country.  Like Eisenhammer, Guevara was a man of letters, and took pleasure in documenting his journey.  With Che’s Bolivian Diaries in tow, Eisenhammer sets out on a pilgrimage to discover something new about the revolutionary figure.

It’s always a funny thing when we go chasing after heroes, and Eisenhammer’s trip is no exception.  In recent years, Che has become even more of an international figure, what with the films and books and preponderance of red screenprinted t-shirts.  Che has entered our consciousness as a man of uncompromising ideals and reckless bravery.  However, as it often happens, the myth has obscured the man.

The man was more than just a ruthless general: he was also a lover of poetry.  Che particularly enjoyed the works of Chilean writer Pablo Neruda.  While there are certain ideological similarities between the two men, I like to imagine that Guevara turned to Neruda for refuge from war.  I imagine him paging through the tender love poems, the odes to women loved and lost.  In my mind, this gives a softer edge to the Marxist hero.  Instead of seeing a general, a great fighter and a fearful opponent, I imagine a bearded figure, quietly drunk on words of love.  His appreciation for the written word adds another cast to Che – and it may be the reason he is so beloved by intellectuals everywhere, despite his bloody past.

If you, like me, are curious as to what Eisenhammer learns about his hero, you will have to check out the full article, On The Bolivian Trial of Che Guevara, A Literary Guerrilla.  And when you’re done, spend some time perusing our other articles on Che’s favorite poet: Pablo Neruda.

Get out of my head (and into my car)

Behind The Article: Colin McPhee in Exotic Bali