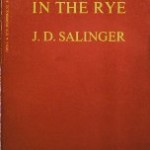 Before legendary author J.D. Salinger’s death in January 2010, he finally came out of reclusive hiding … or at least through his army of lawyers … to fight The Catcher in the Rye‘s unauthorized sequel 60 Years Later written by Fredrik Colting (pen name: J.D.).  However, it wasn’t until nearly one year after his death on December 7, 2010 that Salinger’s estate settled with Colting.

According to the agreement, the permanent injunction reads Colting is barred “from manufacturing, publishing, distributing, shipping, advertising, promoting, selling, or otherwise disseminating any copy of the book 60 Years Later, by Fredrik Colting writing under the name of J.D. California, or any portion thereof, in or to the United States.”

However, Colting is allowed to freely sell the book in international territories.  Literary source Publishers Weekly reports Colting is selling his novel in at least six countries.

So the question is: would you buy 60 Years Later or not?  Are you curious to see Colting’s version of an elderly Holden Caulfield … or do you think the book is just a rip-off and should not be read out of respect to Salinger?

Let us know your thoughts …

P.S. For those of you snowed in, it’s a great day to read Holden Caulfield in Winter Manhattan.

Agatha Christie on the Nile, Egypt