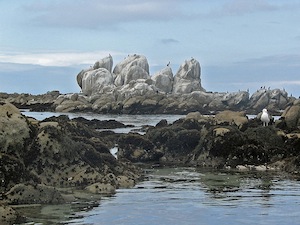 True to the saying, great minds often do think alike.  They also share, borrow, and sometimes steal from one another. Picasso once said that “bad artists copy, great artists steal.”  I don’t if this statement still holds water (or if it ever did, really), but he did get one thing right: the best ideas should be shared.

This may explain why so many intellectuals are drawn to one another.  It’s not necessarily because they have a lot in common (other than shockingly high IQs) or because they can’t communicate with the general population (though sometimes this is also true).  Even the most brilliant minds need to be fed in order to grow and the best food is foreign thought.

At least, this is how I make sense of certain intellectual friendships, like that of John Steinbeck and the famed biologist Edward F. Ricketts.  Though their genius was in very different fields–Steinbeck in literature, and Ricketts in science–their relationship helped both men grow and learn.  In the cramped walls of Ricketts’ lab in Monterey, California, they bounced ideas back and forth, traded inspiration, and opened new channels of thought.

In our most recent feature article, writer Victor Walsh travels to Monterey to see Ricketts’ lab, which has been left basically as it was at the time of his death in 1948.  Still filled with specimens and Ricketts’ personal belongings, the lab stands testimony to a great intellectual friendship–and the work of a great scientist.

Take a moment out of your busy weekend to read about Walsh’s visit to Cannery Row and learn a little more about the life of one of America’s greatest writers with our piece A Meeting of Minds: John Steinbeck and Edward F. Ricketts at the Lab in Monterey. And if you want to learn more about Steinbeck’s biography, please take a look at any of our other great articles on the Of Mice and Men author.