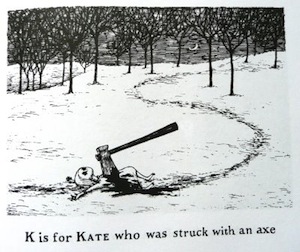 Reading this week’s feature article, on Edward Gorey’s creepy Cape Cod, I was put in mind of a book I once saw during one of my many trips to upstate New York.

I first went to visit the Clermont mansion in Germantown, New York in the winter of 2008.  I had gone to see the impressive grounds, which boast a beautifully manicured garden and a breathtaking view across the Hudson River.  Unfortunately, the weather was not amenable to strolling around, so I wound up being forced inside to examine the relics of a family long dead.

This turned out to be an unexpected blessing.  The old house was filled with fascinating artifacts, including a very old, very famous portrait of Andrew Jackson.  My favorite item, however, was (naturally) a large, leather-bound book.  Kept safe under its layer of glass, the book was opened to a page depicting a small girl in several different situations.  In the first, she tucked a poker into the fire.  In the second, she leaned closer.  In the third, she ran as her dress spread out behind her, ablaze with orange flames.  The moral?  Don’t play with fire.

This was, surprisingly, a children’s book.  Back when it was written, childhood was seen as a dangerous time, filled with unexpected perils.  Death was always around every corner.  Nowadays, we tend to favor happy books with happier endings, though this was not always the case.

Perhaps this is why Edward Gorey is one of my favorite children’s authors, along with Roald Dahl.  Both realized that childhood was not always fun and games; sometimes it felt dark and dangerous.  Their works don’t coddle children or shelter them from the world.  Instead, they recognize the weirdness of being a kid, the sense that everything is bigger and more threatening than most adults would like to admit.

Join us this week as we examine the life and works of Edward Gorey in our latest feature article, A Brief History of Edward Gorey’s Creepy Cape Cod, part two of our Dark New England series.

(An LT extra, check out a review of the Hudson Valley’s Pumpkin Blaze!)