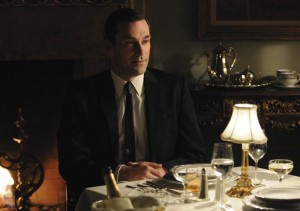 Times, they are a-changin’.  At least, things are changing pretty rapidly for the characters of Mad Men, AMC’s hit drama about advertising executives. For those not in the know, the show, follows Don Draper and his lovely but seriously repressed wife (now ex-wife) Betty as they struggle to figure out where they belong in the ever-changing world of 1960s America.

Here at Literary Traveler we have quite a few Mad Men fans, and we suspect our readers have been similarly captivated by the critically-acclaimed series, which is on its fourth season.  The newest season begins on Sunday July 25th, at 10/9 central and I, for one, know exactly where I will be that night when ten p.m. rolls around.

It might seem strange that a blog devoted to literature and travel is covering a television series, but Mad Men is so rich with literary allusions – and is set in a time of such social and political turmoil – that we would be remiss to completely ignore it (plus, have I mentioned we’re fans?)  Last season, we saw Don leave Sterling Cooper to start his own firm, the assassination of John F. Kennedy, and the beginnings of Betty’s new marriage.  We also watched as the characters confronted the Civil Rights Movement and several began to experiment with drugs and the counterculture movement that has come to define our view of the 1960s. It was, in a word, epic.

To get ready for Mad Men season four, please be sure to check out our series by author Paul Millward.  First, read Flower Children of the 60’s & Ken Kesey, Father of LSD and Hippies before heading to Mad Men, Creating a Perfect World on the Avenue of Dreams. Both are essential reading for any true Mad Men fan.

And don’t forget to tune in Sunday to see where the Mad Men new season takes us!