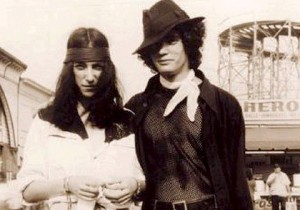 After I finished Patti Smith’s memoir, Just Kids, I put my hand over my heart and wept. After that, I ordered a dress-form and a swath of gold leather online, dumped all my paints, pencils, brushes and duck cloth onto the floor, called my grandma, and downed a glass of chocolate milk.

Patti Smith’s latest book (she’s published a couple non-fiction and poetry books) was so well-written. And her lifestyle in New York City in the 70s was shocking–both for it’s mundane rhythm and it’s provocative statement. It’s an artist’s statement in a way, a collection of stories that express her body of work as a writer, performer, musician and activist.  But most important: she tells a good story about friendship. Her romantic, serious phrasing, reminiscent of the French poetry she obsessed over, would seem contrary to her rock and roll persona if she weren’t so sweet-natured.

Patti Smith has been a truly significant voice for environmental and human rights for many years, but in her memoir, her tender phrasing peals apart the most sensitive (and often saddest) passages of her. Her friendship with Robert Mapplethorpe, whom she lived with at The Hotel Chelsea, was saturated with sad comforts and colors. To say they knew each other intimately is an understatement. Before he died, Smith promised Mapplethorpe she would write their story: a love story about growing up in a quickly-changing New York art scene,  where artists were lucky if they got out alive. If they did, they lived to tell their story. In Just Kids, Smith is an incredibly believable character. She travels and grows and sours and butterflies in a categorically common way. She harps on regular frustrations like her day job, then graciously extends her hand when we can’t believe her luck. And Mapplethorpe was on her arm throughout it all.

A list of influencial names collected from Just Kids: