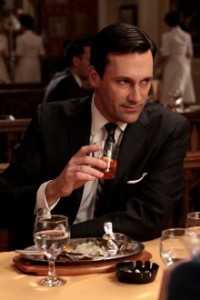 We recently covered one aspect of 1960s society with our article on counter-culture and the influence of writer and merry prankster Ken Kesey.  This week we turn to AMC’s hit television show Mad Men to help illustrate another, more mainstream, side of the American coin.

A friend of mine once described  Mad Men as being about “nothing more than a bunch of white men drinking, smoking, and sleeping around.”  While this may appear true to a casual viewer – and certainly, much has been made of these less savory aspects of the series – Mad Men is about so much more than the characters’ vices.  It is at once an exploration of our culture of consumerism, a study of the lives of several representative characters, and a portrait of the rapid changes that shook America throughout the 1960s.

In our newest feature article, Paul Millward takes a look at advertising culture and the significance of the American dream, a phrase that has become so common that it has almost lost all meaning.  But with a little help from Mad Men and Millward, it becomes possible to see how advertising appeals to the same portion of the human psyche that is willing to invest in something like the American dream.  Consumer culture is only one type of wish fulfillment, yet it represents our near constant need to always seek out something more, something greater, something forever beyond our grasp.

If you’re anything like me, there is no such thing as too much Mad Men.  However, even a veteran watcher like myself can appreciate a new, fresh take on the much-discussed show, which is why I suggest you take a moment this week and read Millward’s ode to Don Draper, New York, and the dream merchants of the 1960s with his piece Mad Men: Creating a Perfect World on the Avenue of Dreams.