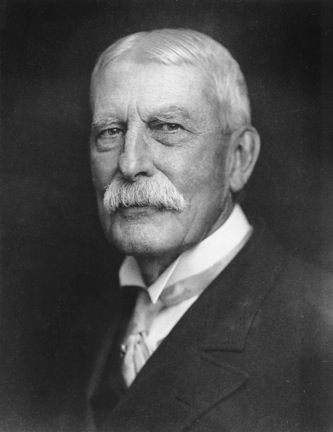 American tycoons were once something we admired as a nation. They were the physical embodiment of the American Dream and represented the supremacy of the free market. Turn-of-the-century oilmen, factory owners and real estate magnates were the celebrities of their day, both beloved and envied for their success. In 2011, this is no longer true. The super-wealthy “1%” exists in the public consciousness today as a despicable, money hungry bunch, whose financial success is a testament to their ruthlessness and lack of empathy rather than the “classic” American ideals of hard work and faith.

Fortunately for him, Henry Flagler made his bones in an era when the tycoon was king. He grew up in Hopewell, New York during the 1830s, raised by his mother, Elizabeth and father, Isaac, an itinerant Presbyterian minister. Young Flagler only attended school until the eighth grade when he dropped out and moved to Bellevue, Ohio to work for his uncle. The future titan of industry began his working career at a meager salary of $5 a month plus room and board. However, as his later achievements would illustrate, Flagler was a man of formidable ambitions and by age 19, he was promoted to the company’s sales staff at an increased salary of $900 a month. Henry Flagler was on his way.

Late in his wildly successful career, Flagler was viewed by the American public as an exemplar of the “Horatio Alger myth;” a real “pulled up by his own bootstraps” story. However, as is often the case, the public’s perception of celebrity is slightly skewed: Flagler was born into a wealthy family. In fact, he was only able to found his first company in 1862 after borrowing nearly $100,000 from his mother’s side of the family and recruiting his brother-in-law, Barney York, as his business partner. Due to widespread salt shortages related to the Civil War, The Flagler and York Salt Company was initially profitable, but the recipe for success was not destined to last. In April 1865, the Civil War ended, provoking a freefall in demand for salt and the company collapsed.

After the failure of his first company, Flagler returned to Ohio and took a job with a grain company. Undeterred, and determined as ever, Flagler was also aided by an exceptionally serendipitous meeting. Through his business dealings with the grain company, Flagler became acquainted with John D. Rockefeller, a New Yorker, who was in Ohio to start an oil refinery in Cleveland, a city that was quickly becoming the center of the burgeoning oil industry. In 1866, when Rockefeller was searching for investors to get his refinery off the ground, he remembered the savvy young grain salesman he had met the previous year. The ensuing negotiation demonstrated Flagler’s impressive business acumen as he leveraged his $100,000 investment into a position as Rockefeller’s full partner. The refinery was a success and the business grew into the famous, turn-of-the-century American corporate behemoth, Standard Oil.

Although Henry Flagler’s substantial fortune would have made him a member of the 1%, were he alive today, he likely would have resented the image of selfish, unchecked excess associated with modern tycoons. He was renowned as a generous, avuncular fellow who eventually abandoned his executive duties at Standard Oil in order to focus his energy on construction and philanthropic efforts in Florida.

This biographical blog series on Henry Flagler will continue next week with posts on Henry’s first trip to Florida and the epic tale of the overseas railway and its financially bloated, hurricane battered construction!

To Kindle, or Not to Kindle: This Holiday Season, That is the Question

Key West, Day One: An Overview