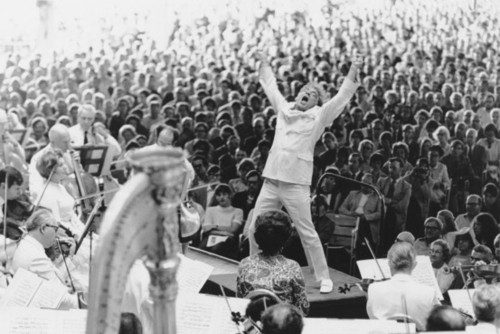 Leonard Bernstein was born and raised in Lawrence, Massachusetts, where his family ran a bookstore. He studied in Boston and Cambridge, as well as Philadelphia, Pennsylvania. In New York City he became known as a producer, in Vienna and Israel he was touted as one of the world’s greatest conductors; it was Tanglewood, however, to which Bernstein would “come home” to perform the work, and foster the friendships, that helped shape who he was as a person.

While Bernstein had long standing associations with many orchestras and areas–New York, Vienna, Israel–his lifelong relationship with Tanglewood, Massachusetts, stands out as one of the most defining places and experiences of his life.

Leonard Bernstein was accepted into the Tanglewood program in 1940 by Serge Koussevitzky, the iconic conductor and director of the Boston Symphony Orchestra at that time. Bernstein had already finished his studies at Curtis with Fritz Reiner, another major influence, but it would be his time spent studying with Koussevitzky that would shape the public persona that everyone would come to know; the flair for the dramatic, the commitment to new music, and a love of teaching became principals that defined him for the rest of his life. It would also be at Tanglewood that first summer where Bernstein would meet another of his greatest friends and musical influences, Aaron Copland.

Bernstein maintained a relationship with Tanglewood for the rest of his life, eventually taking over for Serge Koussevitzky, teaching young conductors and composers, and leading the BSO in their summer season. It would also be at Tanglewood that he would “come home” to give his final concert. On August 19, 1990, Bernstein gave his final concert, almost collapsing on stage from a coughing fit, forcing himself to continue on and giving one of his greatest performances. All of his friends and family say that he knew it would be his final performance. He would die a few weeks later on October 14, 1990.

The Cambridge Symphony Orchestra is playing A Tribute to Leonard Bernstein, Sunday November 13, 2011, at 4:00PM at the Somerville High School on Highland Avenue.

The program includes the Overture to Candide, an operetta composed by Bernstein in 1956, based on the satirical novella by French philosopher Voltaire; a sweet and compelling orchestration of West Side Story, which premiered on Broadway in 1957; and in excellent contrast, Symphony No. 3 by early Romantic composer, Robert Schumann.

Please join us for a beautiful program and a historical, musical tribute to Leonard Bernstein—the places that influenced him, and indeed, the places influenced by him.