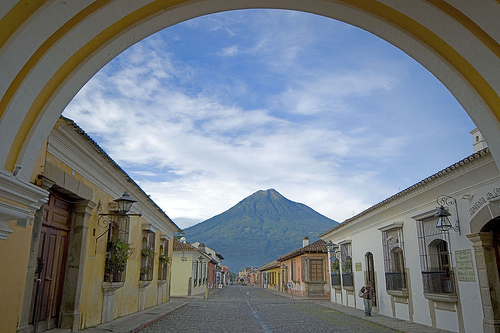 I touched down in Guatemala yesterday afternoon.  Originally, I planned to go directly to Quetzaltenango, where a former high school classmate is launching his non-profit, weGuatemala.  But, anticipating the long weekend and my yen for ruined churches, I decided to spend the day in the deliberately old-school city of Antigua, and maybe try to see Lake Atitlan (a la Aldous Huxley’s Beyond the Mexique Bay) on the way.  Good plan, it turns out.

Heavy rains on Thursday and Friday created mudslides on the routes to the west of Guatemala City, and a chicken bus (colorful second-class transportation) went under.  Last I read, there were 37 confirmed deaths, and 23 missing persons.  President Alvaro Colom declared it a national emergency, and la ruta Interamericana has been closed.

If I’d taken my malaria meds, I’d be booking it for Tikal right now — ruins on a large scale, and far to the east.  As is, I’m grateful to be here, and I’ve developed an interest in traveling first-class.  Because–I can’t help but think this, erroneous as it is–throwing money at it might make the landscape less chaotic.

And, given recent events, I’m a little perplexed by my interest in the ruins of natural disasters.  I think every social science nerd geeks out over Pompeii, and I love me some scraps of ancient civilizations, but isn’t there something inhumane about my giddiness over churches ruined by volcanoes?  If the mud out here acts as a preservative (this isn’t an entirely crazy idea — I’m looking at you, mummifying air of Guanajuato), will a future student of the humanities go out of her way to study the chicken bus?

Probably not, since it’s a pretty small-scale disaster.  And while I am not alone in my fetishization of “ruined” civilizations (I’m looking at you, Romantics), I am uncomfortable with contemporary disaster tourism, even as I participate in it.  When Ground Zero was a stop on my marching band’s tour of New York, I cringed,  but I got off the bus.  When I went to New Orleans to knock down houses the spring after Katrina hit, I unabashedly took pictures of the broken dam, and admitted that I had gone down mainly out of curiosity.

The latter was shameless because I was doing what I could to help, even if I just came to gawk.  Maybe that’s the difference.

Weekend Getaway: Roughing It in Maine and New Hampshire