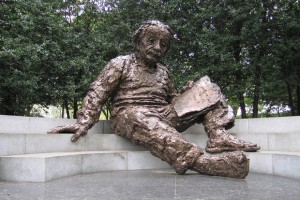 Several weeks back, I found myself in our nation’s capital for a no-holds-barred 36-hour sightseeing binge. Possessed of considerable ambition and slightly above average constitution, I saw much and more in my day and a half in D.C. By the time I settled into my flight out of Reagan International, I was so exhausted it took me a good 7 tries before I was able to successfully power down my cellphone under the watchful, impatient eyes of the flight attendant. So if you’re determined to see the best that Washington D.C. has to offer but don’t want to spend your short stint breathlessly dashing from monument to landmark like some cut rate Dan Brown protagonist, I suggest you learn from my mistakes and try to follow this advice:

Washington is full of tourist traps and it’s your job as a savvy traveler to recognize them from afar and plan accordingly. For example, the clock tower at the Old Post Office is enjoying a bit of a renaissance lately as the premier view in the city while the Washington Monument remains closed for repairs. While the view is certainly nothing to scoff at, the building itself offers all the charm of a mall food court or airport souvenir shop. Instead, try the view offered by one of the guided tours at Washington National Cathedral for an awe-inspiring view of the D.C. skyline.

You can’t see ALL the Smithsonians!

With over 17 buildings in scattered across the National Mall, it would be madness to attempt to visit them all over a short stay in D.C. I chose only the Museum of American History and the Air and Space Museum, both of which are massive, inspiring and completely free of admission. If I had possessed the time, I would have visited them all but alas… In fact, on some still nights, when the wind is just right, I swear I can hear the National Museum of the American Indian softly calling my name.

The famous ones like the Lincoln or Vietnam Veterans Memorial will be crowded any day of the week, but if you are willing to seek out some of the less popular monuments, it is definitely worth it. For starters try the FDR memorial, which includes a small sculpture of Roosevelt’s beloved Scottish terrier, Fala, or the whimsical Albert Einstein Memorial, which is large and accessible enough to provide for photo ops on his lap.

Check out the Newseum

If you plan to use your visit to Washington D.C. as an excuse to museum hop all day long, you owe it to yourself to spend an afternoon here. State of the art, interactive and fun, the Newseum is all the things a modern museum should be. Guests are free to explore a fully functioning newsroom, peruse dozens of exhibits or walk along the largest length of the Berlin Wall outside of Germany.  I personally recommend a temporary exhibition called “Every Four Years,” which chronicles the evolution of how presidential campaigns are covered by the press. In a word: fascinating. I lost several hours to that one.

Keep an eye out for Beltway bigwigs

While dining at Old Ebbit Grill, I spotted Transportation Secretary Ray LaHood across the dining room where he was surrounded by a bunch of suits with identical “Congressional haircuts.” When I pointed him out to my group, it was unanimous that they were unimpressed and that I was a total nerd for recognizing him.

If you’re visiting D.C. as a fan of Father Abraham, it’s likely that a stop at Ford’s Theatre is already at the top of your ‘to-do-list.’ But don’t forget to include the house across the street which is the one Lincoln actually died in. Owned by a German tailor named William A. Petersen at the time of the assassination, Lincoln was carried here after receiving his mortal wound. He lingered for 9 hours under the care of multiple doctors before passing away. Replicas of the (too-small) bed where the president was laid diagonally to accommodate his gangly frame remain in lieu of the original. But the blood stained pillow and pillowcase on display are the real thing; used by our 16th president as his life’s blood ebbed away. Highly recommended.

Only open your wallet if you really have to.

One of the great things about sightseeing in D.C. is that the best stuff is free! My favorite spots of the weekend were the Library of Congress and the Smithsonian Museum of American History, both of which I enjoyed for hours completely free of charge.