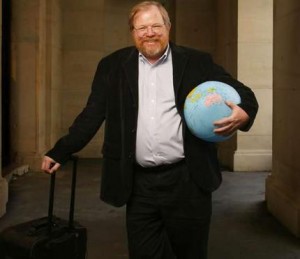 There are few writers who can so seamlessly marry information with a strongly absurdest sense of humor. Bill Bryson is one of those rare authors. Unlike the dry, factual essayists we read in school, Bryson’s books are not only sidesplittingly funny, but also deeply authoritative and observant.

As you might be able to tell, we have been reading Bryson for years, and admiring his singular style and voice. From the first book we picked up on the Appalachian Trail, the 1998 A Walk in the Woods to his wildly popular A Short History of Nearly Everything.

In 2010, while traveling across the Atlantic on the Cunard’s Queen Mary 2, Literary Traveler got to meet the famous writer. Bill was taking the cruise as a special guest for their Liners & Literature series. During this time, he had a few duties: relax, enjoy himself, and speak to the other passengers about his impressive career, his thoughts on Britain, and his unique views on writing and reading.

“Everybody likes books that are about them,” he observed during our interview. “My book about growing up in Iowa seemed to really resonate with Americans. The other book that did very well in America was A Walk in the Woods… but the book that sold in Britain was Notes on a Small Island. I suppose it’s natural that people are most attracted to something about them.”

He also revealed the genesis of his writing career. “My dad had a great collection of hardback books from the 1930s and 40s, and he had a lot of books by PG Wodehouse. He had books by people like James Thurgood, Robert Benchley, and S.J. Perelman—four really, really funny writers. I picked up these books when I was thirteen and fell in love with the idea of being able to use language as a way of making people laugh.”

To learn more about Bill Bryson, take a few minutes to watch our full interview with the author, shot on board the Queen Mary 2. Covering everything from baseball to the Brits, it’s the perfect way to get to know one of the most beloved humor writers living today. See the clip at Literary Traveler TV here.