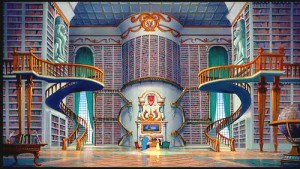 I have always loved books, and I don’t mean this broadly, as in “I love to read,” which, of course, is also true.  I have always loved books: the shape, the smell, the weight of the hardback cover in my hands.  I know I am not alone in this.  I have had this conversation with friends and classmates, some who agree with me and some who advocate for the ease of electronic reading.  My love of the physical object of the book has been a major roadblock for me when it comes to succumbing to the purchase of an eReader.  But, as I brave my commute to class with a bag so heavy I am sure my back will someday pay the price, I am tempted by the train passengers who are engrossed in the small electronic devices.  With the ever expanding selection of Kindles, Nooks and iPads, it seems that this eReader worship is not a passing phase.  In my recent English courses we often discuss the future of the book, and question whether the book as we know it now is about to go the way of papyrus scrolls and clay tablets.  With IKEA even making their bookshelves smaller, one wonders if they will cease to hold books altogether, and there goes my childhood dream of one day having a library like the one in Beauty and the Beast, complete with spiral staircases and sliding ladders to reach the unending shelves.

But, bibliophiles, don’t give up hope just yet.  It appears there has been a resurgence in the nostalgic appeal of the book as it once was.  While it seems safe to say that the popularity of eReaders will continue to rise, it appears to have jumpstarted a countermovement.  While paperbacks are small, light and easy to carry, the newest fad in book production cares not for convenience or practicality but instead presents the book as it once was, in all its nostalgic glory.  In recent years Barnes & Noble began releasing its Leatherbound Classics, beautifully imagined editions of classic texts with intricate cover art and spines that beg to be proudly displayed.  At under $20, they are reasonably priced and, with additional titles continuously being released, they present a great, affordable way to build one’s library.  From classic literature to Jurassic Park to an edition of medical text Gray’s Anatomy, there is a wide spectrum of titles for both children and adults.  Standouts for me include a striking edition of Jane Eyre done in black, with silver lettering offset by red edge coloring, and a unique edition of Alice in Wonderland, which stands out in pink with a contrasting gilt edge.  The Ultimate Literature Collection features ten volumes and would be a great starter kit for any library. It includes a variety of authors and works, including a volume encompassing seven Jane Austen novels, another volume boasting the complete works of Shakespeare, and eight other texts running the gamut from Dante to Homer to Ernest Hemingway.

Similarly, around the same time as B&N, Penguin Books also released a line of Penguin Hardcover Classics.  These editions feature gorgeous bright covers designed by renowned designer Coralie Bickford-Smith and are done in embossed linen with colorful endpapers and ribbon page markers.  Available through Penguin Books, or on Amazon.com for under $20, these editions are both affordable and accessible.  With new titles constantly being added, including a plethora of Jane Austen titles being released this spring, you can pre-order now.  Slimmer volumes than B&N Leatherbound Classics, they often contain only one novel per book.  Whereas the B&N Leatherbound Classics offers one 1496 page volume containing five seminal Charles Dickens works, Penguin offers a box set of six individual Dickens novels, making the choice between the two editions one of personal preference.  So whether you’re drawn to the rich, dark tones and gilt edges of the Leatherbound Classics, or the nostalgic appeal of the Penguin Hardcover Classics, these books are great as gifts or make fabulous additions to any personal library. So, to those who say the eReader is the way of the future, I wouldn’t close the book on the book just yet.